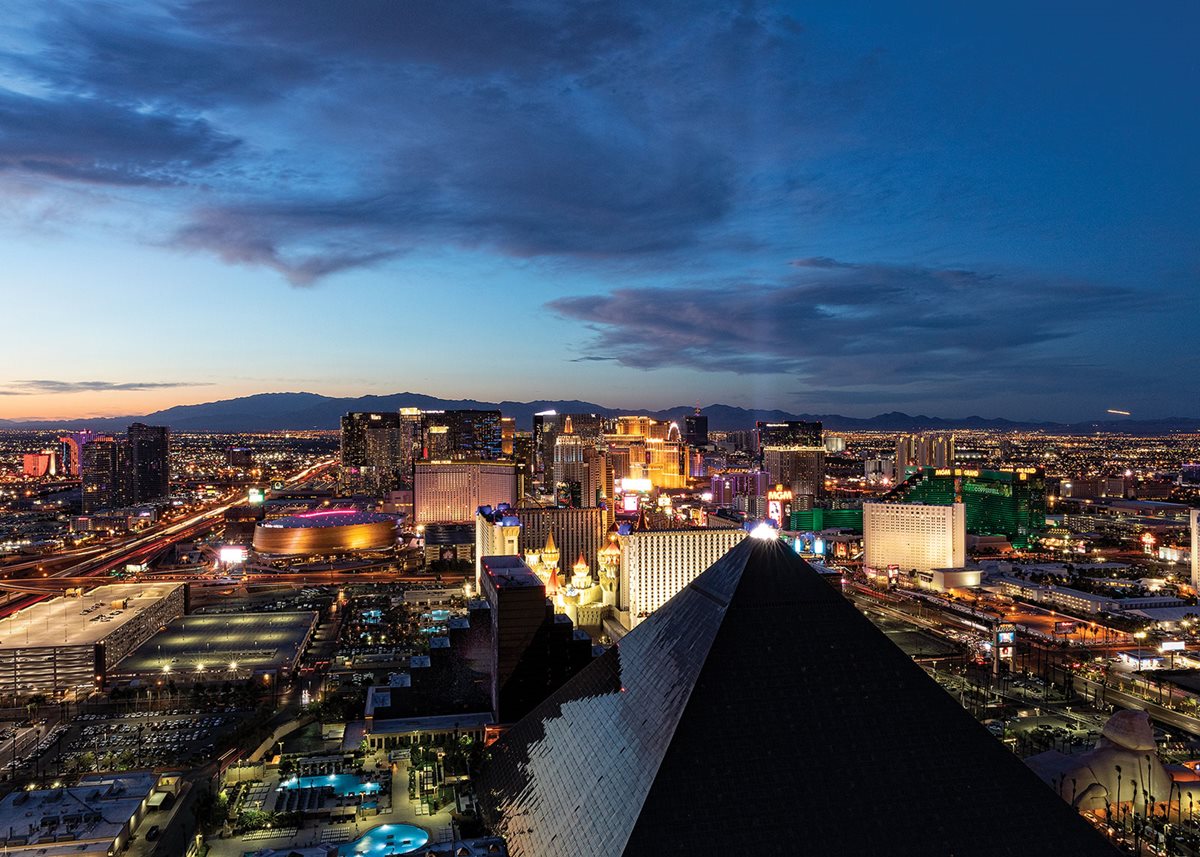 A third wave of big-name chefs and restaurants makes bold, delicious dining the one sure bet in Vegas.

In the beginning, Vegas casinos created their own restaurants according to the cruise-ship formula of the time: a steak house, a deli, an Italian place, an Asian place, a buffet at every property. With no names on the doors and no eye toward luring patrons from other resorts on the Strip, these Las Vegas restaurants were primarily way stations at which gamblers could refuel between poker and craps.

The second dining wave rose from the mid-1990s through the recession: Vegas was reinventing itself as a destination for families and sophisticated travelers, and, as the Food Network’s influence crested, people began to refer to themselves as “foodies.” That meant hotels partnering with titans such as Guy Savoy, Alain Ducasse, and Joël Robuchon, as well as Bobby Flay and other celebrity chefs, to open splashy restaurants – many of which remain popular today – to attract this new class of traveler.

Following a robust recovery after the economic downturn, Vegas casinos doubled down on partnerships with a third wave of restaurateurs that shows no signs of breaking. But instead of going for mass-market appeal and widespread name recognition, they tapped operators with the street cred and critical acclaim a new generation of dialed-in, discriminating diners demanded. The timing was perfect, as many of these chefs were just dipping their toes into empire-building.

“I always loved the idea of bringing Carbone to Las Vegas,” says Mario Carbone, who, along with partners Jeff Zalaznick and Rich Torrisi, opened a branch of their Greenwich Village red-sauce wonderland at Aria Resort & Casino in 2015. “The city was partially defined by the Rat Pack, so it felt like the perfect fit and had to happen at some point. We jumped at the chance.”

Another New Yorker, David Chang, followed two years later with Momofuku at The Cosmopolitan. After that it was game on, with cool new restaurants cementing the Strip as one of the country’s top dining destinations. Here’s where to catch the current set. 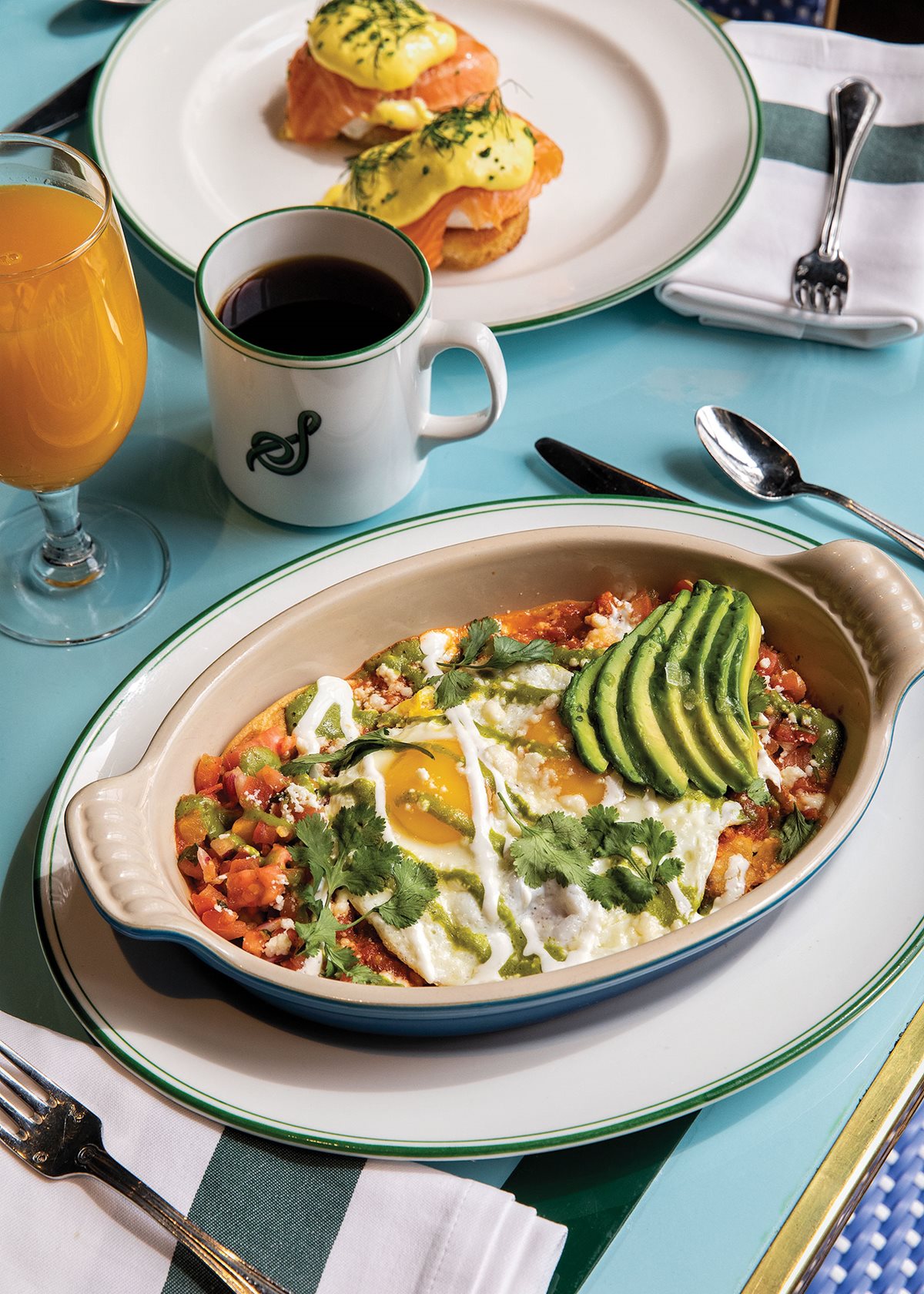 Fancyometer: 2/5 Carbone, Zalaznick, and Torrisi weren’t done with Vegas by a long shot. One of the biggest and busiest newcomers of the last year, Sadelle’s, premiered over Christmas break at the Bellagio in the former Café Bellagio. By day, pastry carts stacked with sticky buns and jelly doughnuts roam the pearl-and-Tiffany-blue dining room, and bagel towers and tiers of smoked fish turn table displays into mini skylines. At lunch and dinner, they ice the deli-deluxe swagger in favor of diner and retro-Continental classics: Tableside tossed salads take over, followed by finely rendered versions of the turkey club, the tuna melt, the cheeseburger, and, for ballers, a two-pound lobster or brawny blackened rib eye. Before it became a thing across the country, the all-day restaurant was a Vegas staple – at Sadelle’s, it comes full circle. 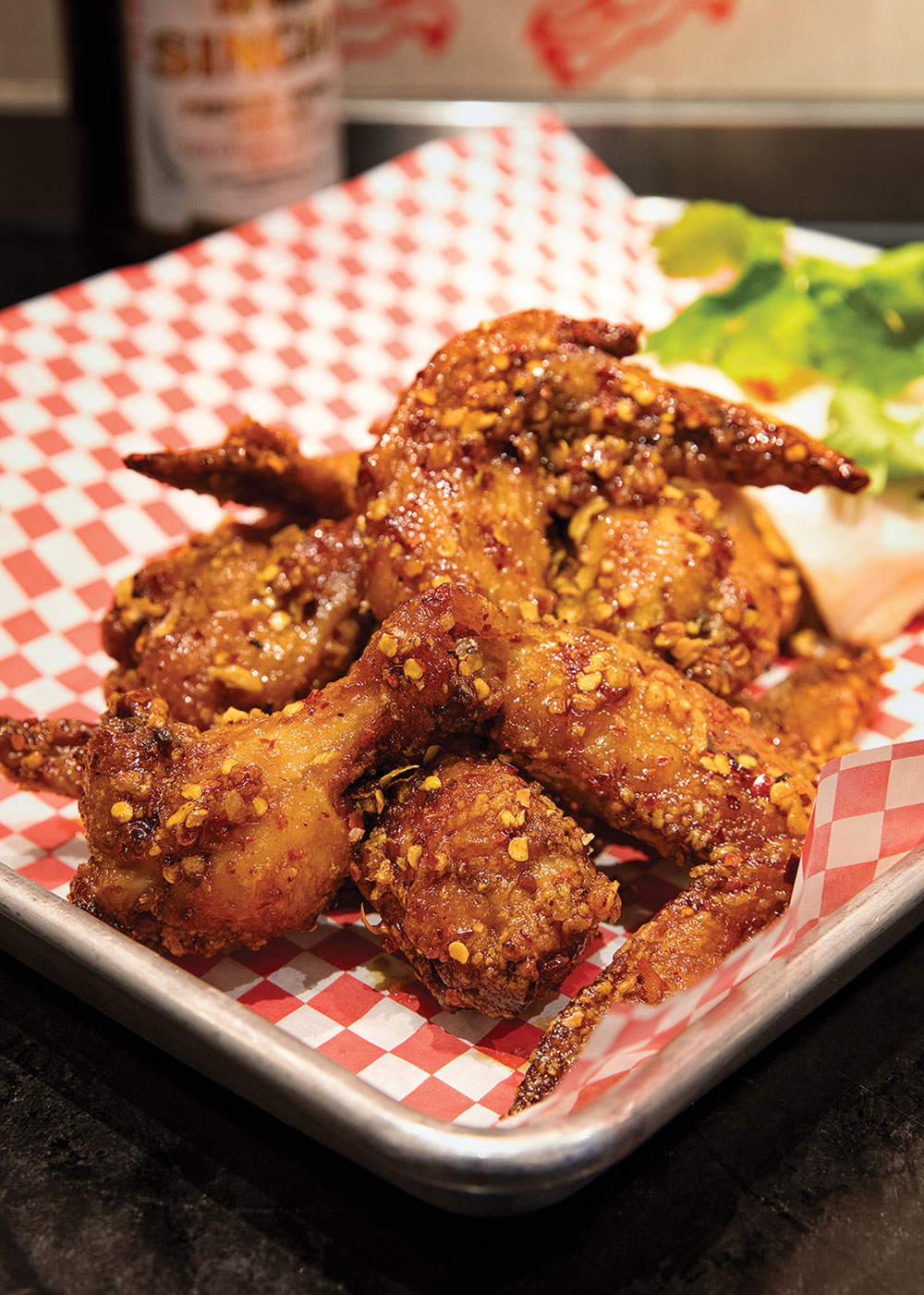 Pok Pok Wing at The Cosmopolitan

Fancyometer: 1/5 Located on the second floor of The Cosmopolitan’s Boulevard tower, Block 16 Urban Food Hall turns a year old in August. The culinary concourse features counter-service stalls from local and national operators such as Hattie B’s Hot Chicken from Nashville and New Orleans’ District (doughnuts and sliders), but the one with the most buzz right now is Andy Ricker’s Pok Pok Wing. Ricker, who’s had a devoted following since opening the original Pok Pok in Portland in 2005, deals his greatest hits here: pork or prawn pad thai, electric papaya salad, and chicken wings dark and sticky with the James Beard Award-winner’s legendary fish-sauce caramel. Order half a dozen to eat at the restaurant, and another half dozen to eat in your room in a robe at midnight. 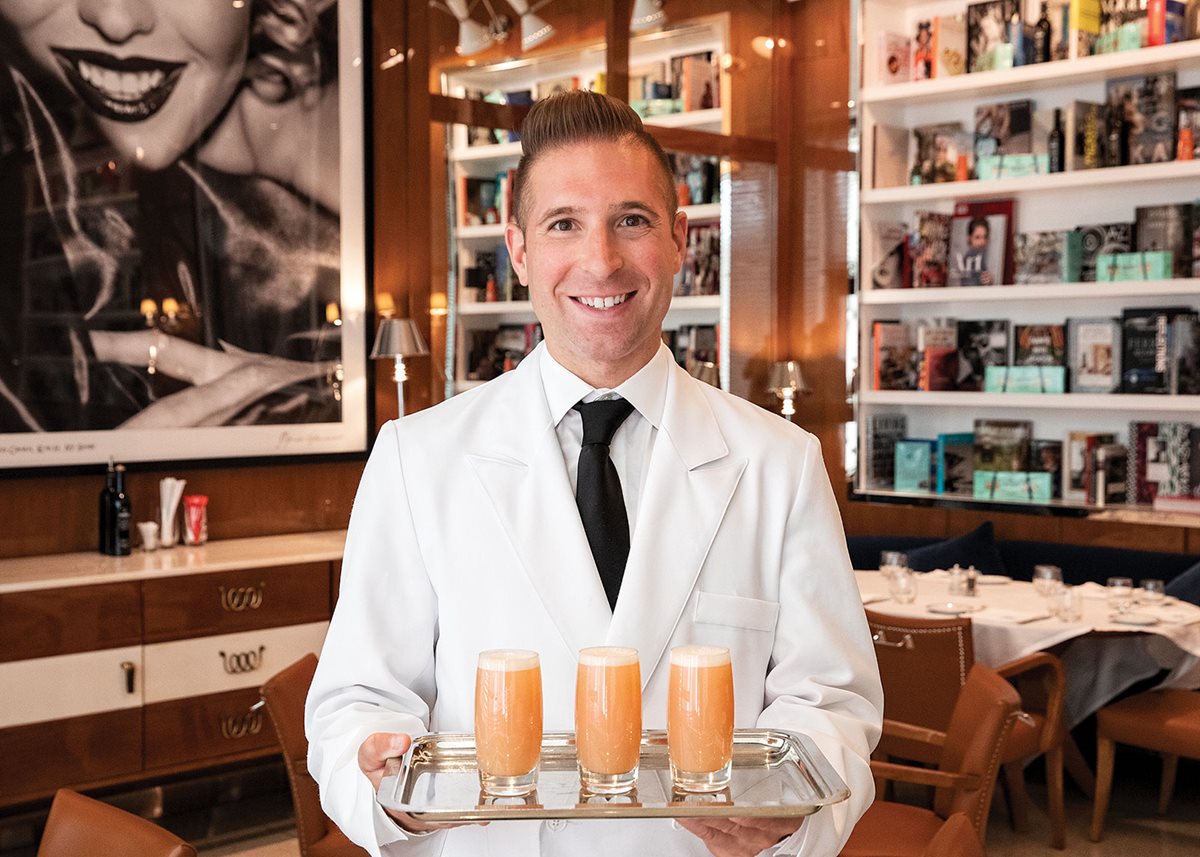 Cipriani at The Wynn

Fancyometer: 3/5 Blown-up black-and-white headshots of 1990s supermodels grin down on diners at Cipriani’s new navy- and camel-colored Vegas branch at The Wynn, the second in the U.S. It’s a fitting motif – the Cipriani has always been synonymous with the fashion, celebrity, and general jet-set circles – but one grounded in traditional Italian cooking: carpaccio alla Cipriani, silky salt-cod mantecato, mushroom risotto, and Venetian-style calf liver with polenta. Bellinis, as expected, abound. 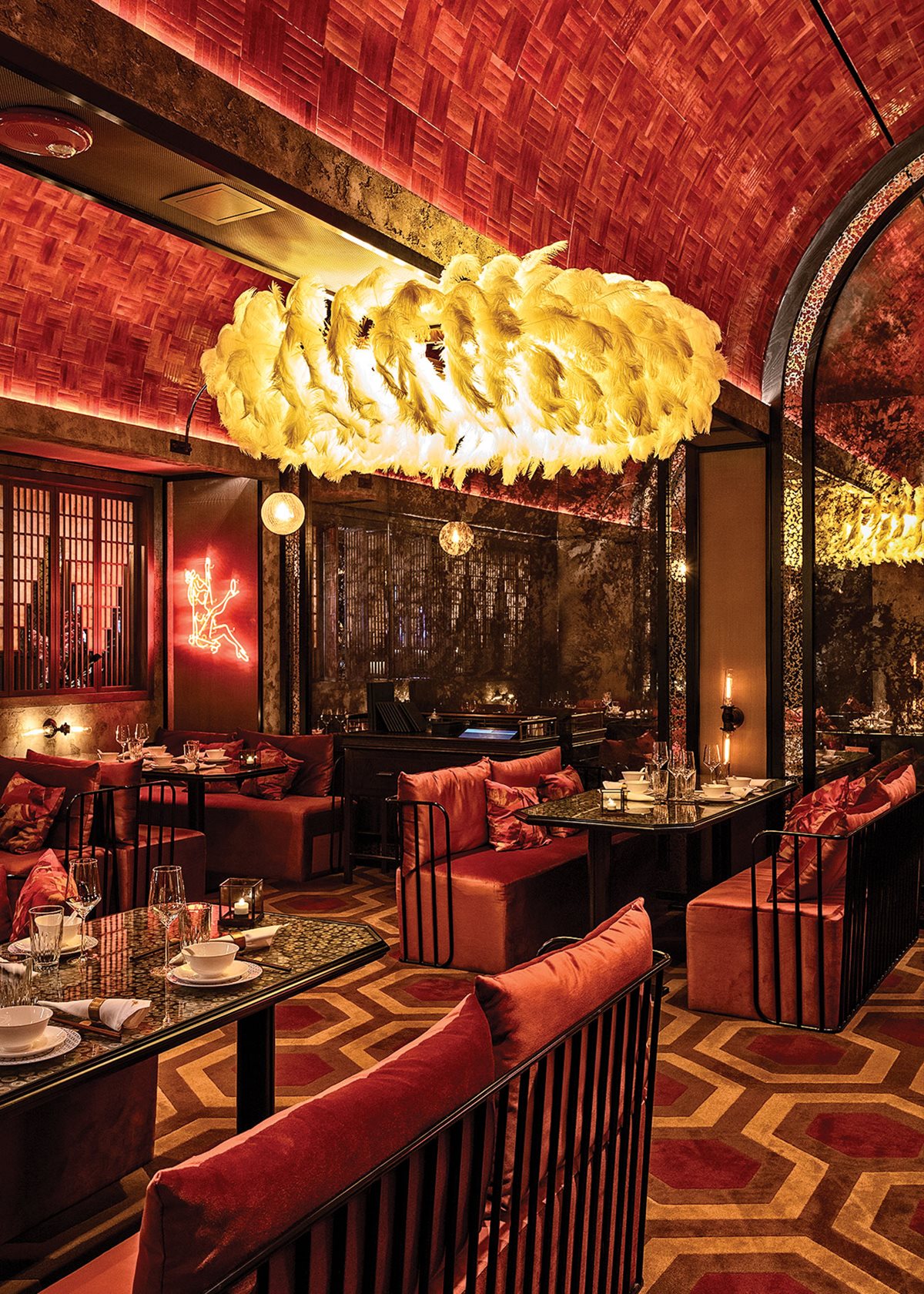 Fancyometer: 5/5 Not content with just importing American talent for its slew of new restaurants, The Venetian ventured far east to Hong Kong, where Mott 32 has held court on the restaurant scene since 2014. Opened in December in the Palazzo tower, the Vegas outpost is a maximalist fever dream of arched ceilings, neon, diaphanous chandeliers, and a table made from a vintage roulette wheel. Steamed soup dumplings, duck lettuce cups, and barbecue ibérico pork buns serve as warm-ups for the star attractions: large-format, status proteins – whole Alaskan king crab two ways ($98 per pound), Imperial bird’s nest soup ($98 per person), braised Japanese abalone with oyster sauce ($398), and more.

Majordomo Meat and Fish at The Venetian Resort Las Vegas

Fancyometer: 4/5 David Chang’s original Majordomo smash landed in Los Angeles so hard in 2018, it sent tremors through the competition. After receiving such lavish praise for its gutsy cooking, it wasn’t much of a surprise when Chang announced he would open an outpost at the Palazzo (coincidentally, next to Mott 32), in the former Carnevino. It’s a fitting address, as Majordomo will carry on the previous occupant’s tradition of serving grand cuts of beef, such as 45-day dry-aged rib eye with cheese fries and smoked whole-plate short rib surrounded by ssam condiments.